My kids love to dress up and have ever since they were toddlers. It is hard to find non-character dress up that fits the littles. When my oldest was 18 months the only thing I could find was Disney dress up or old Halloween costumes. Then reports of some of the costumes containing flame retardants, lead, cadmium, and other heavy metals came in- so when my son was at the dress up stage I had to find alternatives.

Now my littlest is 16 months and LOVES to dress up with her siblings. So when Seedling announced their new Littles collection, I got really excited! Seedling’s Littles are creative play kits for toddlers which include: Magical Hero Dress Up Cape, Galaxy Rocket Adventure Cape, Farmers Market Playtime Kit, Let’s Roll! I Love Sushi Kit, Under The Sea Puppet Playtime Kit, Dress Up and Play Animal Ears Headband, and Royally Cute Kitty.

The kits are for ages 2-4 but the Magical Hero Dress Up Cape fits my 16 month and she is in love being a super hero!

The awesome thing about this kit is that the lightning bolt, rainbow, cloud and star-shaped patches are all attached to the cape and arm bands with velcro and can be moved! So each time the child dresses up they can customize to their mood. My daughter loves moving the pieces around and it is helping develop her fine motor skills.

The Magical Hero Dress Up Cape is also reversible- so brothers and sisters can both enjoy! My son, who is 4, is obsessed with the arm bands and is always taking off with them. My daughter’s room is unicorn themed, so he associates unicorns with girls- but when I showed him he could flip the cape around, he got pretty excited. 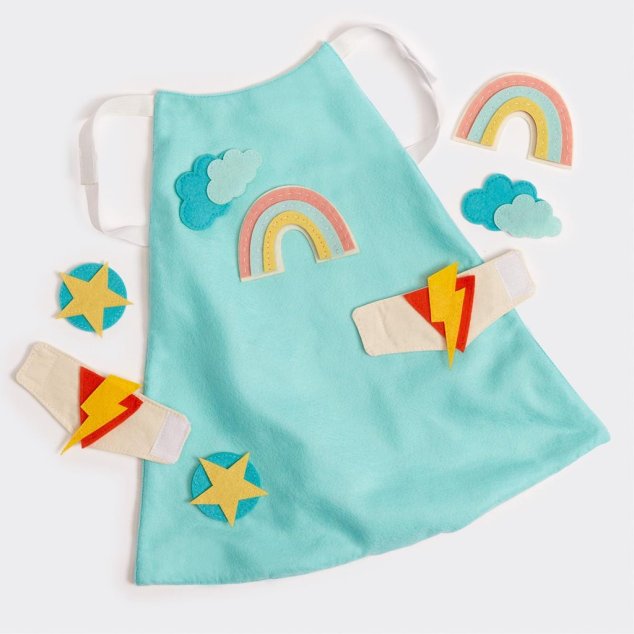 I love gender neutral toys that inspire the imagination- and especially love that the cape can appeal to both sexes- because what little girl doesn’t love unicorns and what little boy doesn’t love super heroes?? The Magical Hero Dress Up Cape retails for $29.99 and can be purchased online at Seedling, Amazon, and in select Neiman Marcus stores. 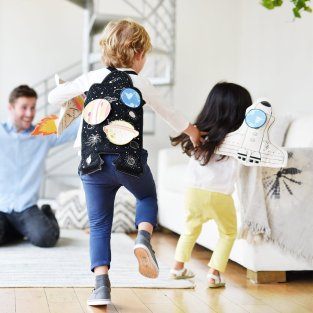 The Galaxy Rocket Adventure Cape retails for $29.99 and can be purchased online at Seedling, Amazon, and in select Neiman Marcus stores.

You can see more of the Seedling Littles collection here. The collection features soft, portable, play kits that empower toddlers with a fantastic range of experiences from becoming their own superhero to preparing sushi, or even exploring the galaxy in a customizable rocket-launching cape.

A Little More Magic for You!

Download the free Littles app for more exciting discoveries! Elements in your Seedling Littles kit will come to life with the magic of augmented reality. Hold your tablet or phone up to certain areas on the kit and drawings on the box to reveal the surprise! Plus, each kit has its own mini-game!

SAMPLE DISCLOSURE: THE OPINIONS EXPRESSED ABOVE ARE HONEST, ACCURATE, AND NOT ENCOURAGED ANYWAY BY MONETARY DONATIONS. A SAMPLE FREE OF CHARGE WAS RECEIVED FROM SAID COMPANY, AS STATED WITHIN THE EDITORIAL.