Plastic: Avoid plastic toys!!! If there is something that your child must have, look at the recycling code. Avoid anything with the numbers 3 or 7. Also look for labels that say BPA, phthalate, lead free.
Here’s why:

Since BPA, PVC and Phthalates can leach toxins, it’s especially important to pay attention to toys that will go into children’s mouths and bath toys. When these toxic plastics are put in higher temperatures the chance they will leach out is much higher.

Wood: Not all wooden toys are Eco-friendly. Some wooden toys, mainly plywood, are adhered by toxic glue. Look for a label that says, “formaldehyde free” product. Also make sure the paints and stains used on the wood are non-toxic. I’ve read water-based is the next best thing to vegetable based. Rule of thumb, if you can smell the paint, don’t buy it. Also look for the FSC label stating that the wood has been harvested in an eco-friendly manner. Rubberwood is the best choice in wooden toys.

Symbols: Another tip is to look for this symbol:

The CE- European Community symbol means the product meets the European safety standards, which are higher than in the US.

Just because the new Toy Safety Law went into effect this year, doesn’t mean all of the unsafe toys have been taken off the shelves. Look for this label: 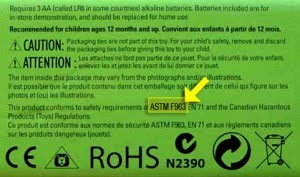 You want your child’s toy to meet the safety requirements of the ASTM regulations.

Unsafe Toys: In December of 2008, a report was done by a non-profit group, NPR, which showed that infant books and bath toys scored poorly when testing for lead, arsenic, and other chemicals. They also found that 1/3 of the toys tested contained harmful chemicals. If you want to see if your child’s toy has been tested, you can visit http://www.healthytoys.org

2 thoughts on “What to look for when buying toys”