I’m beat!! Last night we went to see Disney on Ice Celebrations at the Time Warner Arena in Charlotte. We rode the light rail uptown to make it a big adventure- which wasn’t that great of an idea for the ride home. We got to the arena and headed to the meet and greet set up by Mom Central. Sadly, there were no princesses. 😦 But, Mickey and Minnie showed up and here are the results. 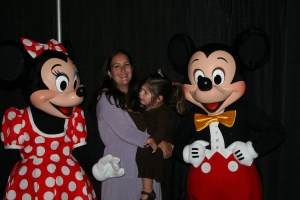 She was terrified! So I guess Santa pictures are out again this year. Mom Central provided us with popcorn, lemonade and amazing gift bags!! Thank you so much!! After the meet and greet we headed through the Disney paraphernalia nightmare to grab dinner. I say nightmare because Ella wanted everything, which was all out of my price range. I really thought we were going to have to leave early since she was exempting her overly tired 2 yr old behavior. After our dinner, we got to our amazing seats and Ella was enthralled when the characters came out and her mood quickly changed.

She was dancing and screaming joyfully at Mickey, Minnie, Alice, Donald, Daffy, Goofy, Pluto, the Mad Hatter and Tweedle Dee and Tweedle Dum.

The set opened with Pinnochio telling a lie that it was his birthday. Then it became a very merry Unbirthday celebration. After Mickey chased the characters around for a party hat, Mickey ended up in his classic cloak and magical hat. Then glowing dancing brooms encircled the stage for a wonderful black light performance.

The next celebration was Halloween- parents of younger children beware!

We bought Snow White Tuesday and the movie really freaked Ella out. So when Jack the skeleton from the Nightmare Before Christmas came out, Ella got really scared. Then all of the Disney villains appeared. The witch from Snow White, Malificent, Jafar, Cruella, Captain Hook, some witches, and ghosts enraptured the ice, terrifying Ella. So if your child is scared of spooky characters, masks, ghosts and whatnot- take a walk when the dancing brooms end. I’d hate for this to ruin the whole show for your little one!

Luckily the Fairy Godmother glided out and saved the mood for us. Minnie wanted a Valentine’s Day wish and all of the Princesses with their Princes told their love stories in a royal ball. Ella was dancing and having a blast! This was her favorite celebration. Each Princess and Prince made their debut and all of the little girls around us were screaming their names in delight.

There is a short intermission after the royal ball and then Mickey and Minnie visit many different places including Hawaii, China, and they end in New Orleans where you get a taste of the new movie “The Princess and the Frog.” 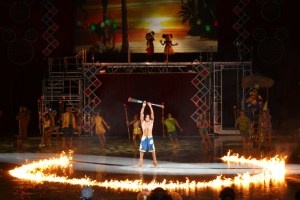 The Celebrations events ends with a magical Christmas journey. Mickey and Minnie take a ride in their classic sleigh, the Toy Story characters fill the stage, and then all of the Princess and Prince characters come out for one final bow.

Even though the show ended 2 1/2 hours past Ella’s bedtime, she really enjoyed the show! Majority of the Disney characters make an appearance, and very few were left out. The show is in Charlotte until the 12th and it may be coming to a city near you. Check out the cool offer below!

*Not valid on Front Row or VIP seats or combinable with other offers including opening night offers. Other fees may apply.

The above offers are good in the following cities:

To learn more about Disney On Ice shows touring the country this year and to find shows in your area, visit the Disney On Ice site. And don’t forget to use the special discount code when purchasing tickets online!

One thought on “Disney On Ice”