I’m so glad today was not like yesterday! Ella woke up in a stellar mood and I debated if I wanted to take her to Disney on Ice. I figured if I wanted to go, then would be the time, so we got dressed and headed uptown to the arena. I’m so glad we went. It was awesome! Mickey, Minnie and friends were the hosts. Then the Cars cast came out and did a 15 minute skit. Then it was The Little Mermaid and Ella LOVED it. She was so still and enchanted during Cars, but really got into it when Ariel came out. She was clapping, cheering and saying, “oooh, pretty.”

The littler girl next to us was scared to death and the girl behind us got scared when the sea witch came out. I was nervous Ella would pick up on it, but she stayed happy and into the show. Then was the Lion King which was pretty cool. It made me wish I still had the movie. I think it’s in the Disney vault now, so I’ll either have to find it at a previewed place or wait till it comes back out. Then there was an intermission and Ella played with the 2 little girls who were next to us. They both were 2- almost 3. They were selling cotton candy with fairy hats, so I couldn’t resist since the hat matches her Tinker Bell costume. Umm, and did I mention it was sold with cotton candy? 🙂

After the break came the fairies which I thought was going to be the best part. Not so much. The story was quite boring and it lost all the girls attention.

I thought we were going to have to leave since Ella wouldn’t sit still, but the finale was great and caught her attention again. She freaked out over all of the butterflies! The setup looked almost like Ella’s bedroom. You can’t really see the tree-house and all the butterflies, but this is pretty good from a camera phone. 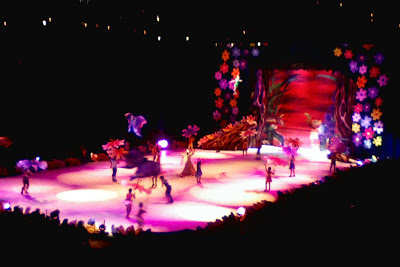 I loved it. After the show we came home and had lunch then Ella took a nap. I had hurricane clean up to do, which wasn’t fun since the house was clean before yesterday. After her nap we ran to Home Depot and got paint for her playroom and then headed to the grocery. We made dinner and played around and that’s been our day. She had 2 melt downs, but nothing like yesterday. Just typical ones that weren’t so bad. I made a pumpkin pie tonight and can’t wait for it to be cool to eat!